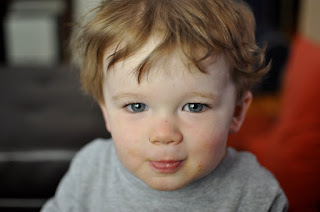 How is it nearly the end of June already? I am having a hard time believing you are only four months away from turning two. The two year old girls in your Little Gym class are actual little girls with long stretched out legs who do somersaults on their own and scale the bars with an ease I am not sure I ever possessed. I look at you, trotting gleefully on your stubby little legs running into things because you never look where you are going and swinging on bars and cannot fathom that you will be climbing those same bars in a few months.

Or maybe I can because two weeks ago I woke up to the sound of you sobbing hysterically. Usually your morning cries are more like whines so this brought me downstairs pretty quickly. I rushed into your room, looked at your crib and then saw you on the floor. Yes, you had figured out how to climb, or in this case, fall out of your crib. Major. Bummer. I was counting on you being contained in that thing until you were at least twelve or thirteen. One Facebook post, 20 helpful comments and twelve hours later, we introduced you to the idea of sleeping on your mattress on the floor. This newest change in your life yielded mixed results, much like all new things in your life. The first night you sacked out for twelve straight hours and I was elated. I should have known better because the next few nights you woke up every two to three hours and banged on your door until I came to escort you back to bed. But there are benefits too to this new routine. Now when you get into bed, I lay down beside you and sing you songs and you cuddle up with your lion and when I say good night you lift your head and blow me a kiss and say, "night." It is the sweetest thing ever and I have to force myself not to sit back down and sing you dozens more songs.

Everything is "mine" now. You point to your dad's beer and my glass of wine and say, "mine," which they most certainly are not. Trying to explain mine and yours is incredibly difficult when it is so intuitive to me and yet you don't get it at all. We spend a lot of time in grocery stores talking about mine and yours as you point to items you would like to be yours.

Another concept that I find hard to grasp now that I actually have to teach it to you is counting. You love to count and love to walk up and down the stairs (which you can do sometimes without assistance) counting each stair but always skipping from six to eight. I am not sure why you don't like seven, but you do like to holler out a triumphant, "ten!" However, as much as you are recognizing numbers and counting, you clearly don't get the concept of numbers as units of things. What makes it obvious that there are three strawberries when you could count each one as its own strawberry? Your father informs me that there are entire books on philosophy devoted to this concept so I am glad to know my brain hasn't gone to complete mush in the mundane details of your life. 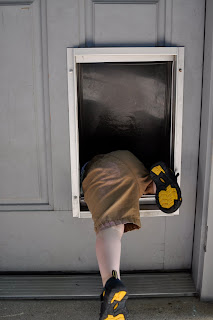 Amazingly, incredibly, finally, you have learned the word, "yes." I thought it would never come and that you would continue to refuse things on principle for the rest of your life. However, you seem to have discovered that sometimes I offer you things that you might actually like so yes is a useful word and you do love to say it. The trick now is to teach you how to tack on a "please" or "ma'am" to the end of the yes. So far that is not going as well. But you continue to make your father and me laugh every day with your antics. The other night you and I were outside inspecting ants and other backyard items and you suddenly ran into the kitchen where your father was making pizzas to grill all the while demanding, "saw-ee. saw-ee." We could not figure it out until we realized you were asking for sausage and you looked triumphant when we gave you some. Other accomplishments include learning how to climb in and out of the dog door, tossing rocks into puddles of mud in the garden and throwing whatever we give you into the garbage can.

Summer - I hesitate to say this since a few weeks ago it was so cold I had to turn the heat on - has arrived and with it the farmer's market and the re-opening of the pool. You love the Farmer's Market for two reasons: the abundance of dogs you can tell us about and the trucks that the farmers use to drive their goods to the market. Seemingly overnight you have become a Boy. A month or so ago a dozen trucks could have passed you on the street and you would not have batted an eye. Now you point them out wherever we go. "Tuck! Boom!" Trash collection day is like a high holy holiday as the garbage and recycling truck circle the neighborhood endlessly.

So we go to the market and you run around pointing out the dogs and the trucks and we try not to lose you in the crowd or let you run headlong into tables of lettuce, beets, peas and dried fruit - not a lot of variety in June in Utah at the farmer's market. On Sundays, after we go to breakfast, we take you to your swim lesson at the JCC. The swim season got off to a rocky start when you started crying the moment we got in the pool the morning of your first lesson. I had this awful vision of being stuck at home all summer long as you resolutely refused to get in the pool. But I should have know your love of water would win out - I fear seeing our water bill since your favorite thing to do is play with the garden hose as I attempt to water the flowers. Within ten minutes you were splashing and playing with water toys, kicking your legs and cautiously trying to blow bubbles. Going to the pool has been another reminder of how much you have grown. Last year you could barely crawl in and out of the pool. This year you wade in fearlessly staring wide eyed at the big kids splashing and throwing themselves into the pool with reckless abandon and I can see for the first time your eagerness to grow up.

A few days ago we headed to a concert at Red Butte Gardens. Your grandfather was visiting from Kentucky and you happily sat on his lap telling him all about your Elmo sticker book for the better part of an hour. Your dad and I were amazed because you are rarely so friendly with strangers and you never stay in one place that long. After awhile you climbed into my lap and ate the parts of your dinner you wanted, discarding the rest and we listened to the opening act, which closed with a cover of Purple Rain. As I sat there holding you I suddenly remembered how I used to sing this song to you every night when you were about four months old as we waited for your dad to come home from work. I would dance you around the living room dipping you on the refrain and you would laugh and laugh.

My throat constricted listening to this cover, thinking of the first time I came to Red Butte with your dad five years ago. We had met that January and now it was June and I was studying for the bar exam and falling madly in love with your father. I remember walking through the garden that summer during concerts on my way to buy ice cream, smiling at the kids dancing and thinking that your dad was the person I wanted to build a life with. Someone to have children with and come to Red Butte with and watch our kid dance. One year later your dad and I were back at Red Butte and just married. I thought about the first night I found out I was pregnant with you and telling your dad, "now I can be one of those happy pregnant women at the Red Butte concerts," and I was. I remembered you inside me kicking through concerts and laughing and hoping you would be one of those dancing kids. Last year we took you and you crawled all over the place, not really getting that you were at a concert but enjoying an outing and staying up past your bedtime. And then my thoughts circled back to the present, sitting with you in my lap as the song played on and tears in my eyes realizing that the long ago dream of being married and creating a little family, and having a dancing kid who made other people smile as they walked by on their way to buy ice cream had all come true. This was our life now and I felt so unbelievably lucky and held you tighter and whispered, "only wanted to see you laughing in the purple rain" in your ear and dipped you a little.
Posted by kate reymann at 7:05 AM 8 comments: