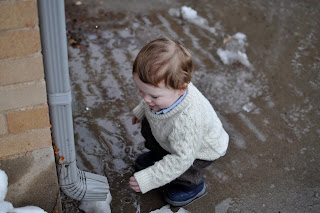 "I will walk down the driveway and look back and you look so tiny dwarfed by the car and the garbage cans and the house. Inside the house you fill up your spaces but outside I can see you for your actual size in the world and you are so little it startles me and twists my heart."

That is a lovely bit of writing.

This is cuz'n Stuart in DC, by the way. Had to use the only Google account I have.

Thanks Stuart! Congrats on your new house and hope all is well with you all.