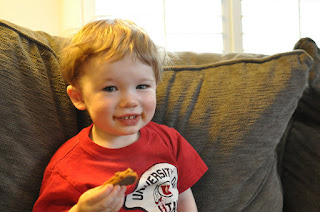 I think I must have read somewhere at some point in time that for two year olds, "what's mine is mine and what's yours is also mine." I am going to put quotes around it because that cannot possibly have been an original thought from me. In the last month your possessiveness has grown to world domination levels. You claim everything as your own, including the zipper of your jacket, which you seem sure I am going to take from you. I have no interest in it other than zipping it up but you remain convinced that I am out to take everything from you. To be sure we have had a few wrestling matches over things that are definitely not yours - my pearl necklace for one; a really sharp pencil that you somehow purloined off my desk for another. I turned around the other day and realized now that you are tall enough to put your cup on the counter you can also pull a lot of stuff off of it too. I fully expect to find you standing in the cabinets soon. 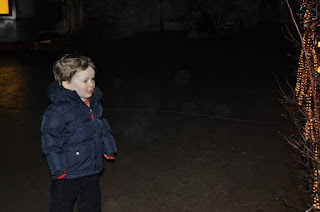 Along with "mine" is your ongoing love affair with the word no. You use it in place of not, isn't or any other word that might be the opposite of an affirmative word. So most conversations with you sound like this:

"Are you going to see your friends there?"
"No see my friends."

"Is Alice your friend?"
"No Alice friend." 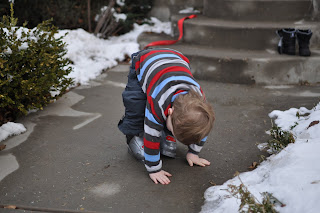 Rounding out the triumvirate of favorite toddler phrases is your need for immediate action. You have become so tyrannical about your demands that I have considered getting a little coat like Napoleon's so that you can march around and issue your edicts in style. If I deign to lie down on your teeny little bed after you have again gotten up at 6.00 a.m. you march back into the room and yell, "Mama! Wake Up!" If I respond by telling you that my eyes are open and I am speaking to you and so I must be fully awake, you then yank off the blankets and say, "Mama! Get Up!" Please be advised that I am filing all this away for future payback when you are fifteen years old. 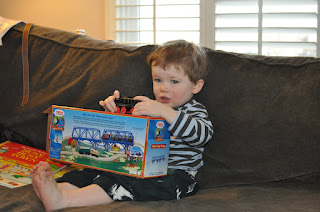 Christmas was less than a month ago but it already feels like six months ago. You loved all of your Thomas items and are still asking to hear the Train Song from The Polar Express every time we get into the car. I finally drew the line the day after 12th Night and declared that Christmas and Christmas songs are over. This has not stopped you from asking for the song nor from discussing how you are going to take the train to the North Pole to see Santa Claus, Mrs. Claus and the elves. Next Christmas should be interesting. A couple days after Christmas you, your dad and I flew off to California for a week of visiting your cousins. At Avery and Birch's house you thought you had died and gone to heaven because they had so many trains, trucks and cars of every shape and size. At Jada and Brooke's house you contented yourself with pushing a pink stroller around because it was the only thing that had wheels. Your cousin Jada introduced you to the Wii dance game but your moves still consist of bobbing up and down. The highlight of the week for you was walking into my parents' house and discovering the Fisher Price steam engine. You played with it for two days straight and even took it to bed with you. You are fathoms deep in love with your grandparents. I think your dad and I could have disappeared as soon as you walked into their house and you wouldn't have cared. 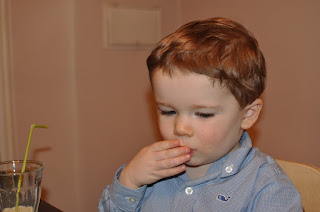 However, I think my enduring memory of the trip will be that you actually fell asleep on top of me on the plane ride home, something you haven't done since you were about five months old. I was like a brand new mother hardly daring to move for fear I'd wake you up and in heaven at the same time. You are so rarely still that to hear your breathing and smell your sweet sweaty head and marvel that your feet now nearly reach my knees whereas you used to fit neatly onto my chest actually made the flight enjoyable. An hour later when the flight attendant woke you by announcing over the the intercom some trivial thing like we were about to land I wanted to cry.

And then a few days into the new year this terrible thing happened in Arizona and a little girl was killed and once more, for the hundredth, perhaps thousandth time, I was reminded that having a child makes you feel everything a million times more than if it had just be me. Having you made the pain of those parents losing their little girl feel all the more real. And I was reminded again that I cannot shield you from all the evil in the world, I can only thank whatever lucky star for keeping us out of harm's way. I know that one day I will be at a loss to explain to you - as I heard my friend trying to explain to her four year old after he heard a story on NPR - why bad governments do bad things to people. I will have to explain to you all of the horrific things of this world and try to come up with reasons for why they happened and sometimes there won't be a reason at all and I imagine that will be as difficult to understand at six as it is at thirty six. I was selfishly grateful that I did not have to explain this tragedy to you.

We watched part of the President's speech and you looked at me as tears ran down my face and you didn't understand why I was crying. I tried to tell you that when the President speaks we must be quiet and listen but you were more interested in your trains. I was in that moment, I am sorry to say, slightly put out by this, wanting to hear the speech and not play with trains but upon reflection, I am so thankful that you are still at an age when most of the world's problems are not yours. Your unhappy moments stem from the fact that you have to put your toys away and go to bed or that you don't like what I have made you for dinner. You are so lucky right now and we are so lucky to have a warm house and clothes and food and that a tragedy has not struck our family in the ways that it struck those people in Arizona. Someday the world will come knocking and you will have to find your way in it but I am so glad that right now you are still small enough to sometime, every once in a great while, climb into my arms and lie there and talk to me the way you did when you were so very little and you would chatter in your infant babble about the trees outside your window. Now you chatter about school and how you don't want to go and about soccer and kicking the ball and your friends and for just a few moments the rest of the world and all of its awfulness and ugliness melts away.
Posted by kate reymann at 2:24 PM 1 comment: