The living is easy 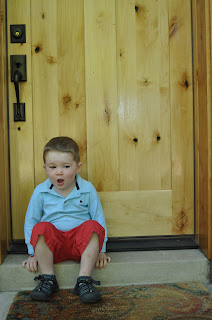 I spend a lot of time worrying about your earliest memories. You dad remembers things from when he was two. I have only a hazy memory of swimming with my father when I was two or three but my memories don't really take on definite form until I am four or five. I worry so much that your first memory will be of me yelling about something, something that was probably totally trivial but in that moment I couldn't be calm about and let go. I recently had a conversation with a friend who was able to see her daughter interact with a teacher and be her usual amazing brilliant, charming, hilarious self, a side her mother doesn't get to see all that often because she is being the mother and her daughter is fighting her. I said to my friend that the hardest part of parenting is that you always have to be the bad guy, the one who insists on manners, respect, listening and not crossing the line and so it is only rarely that you get a glimpse into the incredible being you brought into this world and are trying to mold into more than just a feral being. You have to be the one who forces them to toe the line, to say no, to say time out and break their hearts. But I spent the better part of three weeks with you between school ending and camp beginning and you are an amazing kid. You are considerate. You ask, in between a lot of trying questions, a lot of really interesting questions. We did something new almost every single day and I got to go places I would have never thought to go on my own - a copper mine, a train museum with huge old engines and the Aviary with its beautiful owls. I really hope that you remember those adventures and not me trying (and failing a lot of the time) to bring you up into someone as amazing as your dad. I hope you don't remember me telling you to please get on the soccer field during your games, but recall instead the look of pure joy that crossed your face when you were able to run and kick the ball at the same time. 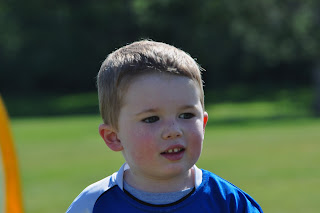 The carefree days of summer are fully upon us. You trot off to camp every morning and the first day of camp I gazed in amazement at the new two year olds starting camp for the first time. Could you really have been that small last year? You seem like a totally different kid chatting with every single teacher in the hallway and swinging your backpack as you stroll into the classroom. The heat, so unlike last year's winter that lingered into mid-June, came very early and so July feels so fully like summer that I keep reliving my own long hot summers in Sacramento.

This is the perfection of the season: the feeling of not a single care in the world except whether perhaps that cute boy on the swim team talked to you. It is the utter thrill of day after day stretching in front of you with nothing to worry about until the end of August and those damned summer book reports I always had to write in elementary school. My sisters and I would leave them until the last few miserable days of the break when we would crank out eight (!) reports in one day. But that bitter memory aside, others crowd in.  The hot nights when the air conditioning would be turned off and my parents would say, "Just lie still girls. You'll cool off eventually," the early morning breeze coming into my bedroom before swim practice, the dry musty smell of the cot I slept on when my cousins came to visit, the endless rounds of solitaire and the Monopoly games with made up rules, the Fourth of July and the feeling of total bliss that I would not recognize as perfection until I became an adult.

You were so excited about the Fourth of July this year that you could talk of nothing else for days on end. You ate hot dogs and slurped down popsicles and burned through about 50 sparklers. Gone was your fear of fireworks that kept you glued to the dining room window last year. This year you could barely stay on the sidewalk as Dad set off a few carefully selected fireworks that would not start any fires, which have plagued the state for a month. You squealed and asked for more only covering your ears when it got a little too loud. 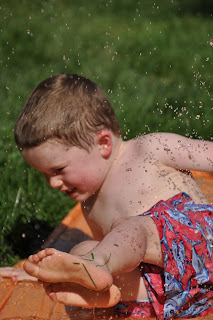 Here are the two overriding memories of my childhood: reading endlessly and riding my bike endlessly around my block, and then around my neighborhood once my mother started to worry less about us getting lost. Long before I ever had you, long before I ever met your dad, I had for years this hazy vision of parenthood and the first thing I would always think of when thinking about children was reading to them and then watching them ride around on their bikes. Nothing encapsulates childhood and especially childhood in the summer better than those two things. They were the constants of my early years and so when I opened up Stuart Little a few weeks ago, it was with a full heart and a catch in my throat as you actually sat in bed and listened to your first chapter book. I suppose it wasn't your first - I used to read Lord of the Rings to you when you were an infant - but you didn't have much say in the matter then and ever since you were about six months old you have been picking out the books we read at night. Best of all though, you loved Stuart and we read a chapter or two a night and you finally finished with Dad the other week with one of the best paragraphs of a book ever.

"Stuart rose from the ditch, climbed into his car, and started up the road that lead north. The sun was just coming up over the hills on his right. As he peered ahead into the great land that stretched before him, the way seemed long. But the sky was bright, and he somehow felt he was headed in the right direction."

Someday you will realize what an incredible writer EB White is; I appreciate him all the more after having spent the last few years plowing through such awfulness as Thomas and the Runaway Train, Bob the Builder board books and any book that doesn't have an actual author. 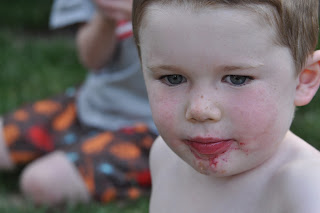 And then there is your bike, or Galahad as you sometimes call it, named after the horse in your newest obsession, Mike the Knight. Now that you are finally confident enough in your riding skills, almost every night you pull out your bike and ride back and forth between the front step, the fire hydrant on the corner to the south of our house and the tree one house down to the north. You set off down the driveway saying, "tootle loo!" and then amazingly navigate the hill without falling off. Sometimes you ride up to Dad and me as we sit on the front step reading and chatting and you give us a hug and a kiss before setting back out on your biking adventures. You say, "Hey!" to anyone who walks or drives down the street and then hasten to assure me that you only said hello because I was sitting there and that you were not talking to strangers without me. These are your parameters and you stick to them, but already you have started to ask to cross the street, which for now I say no to, but soon enough, you'll be crossing it on your own and pushing a little farther afield. I can still see you, but I know the day will come when you go around the corner and I know I'll stand there trying to visualize where you are, with my heart in my throat waiting for you to re-appear.