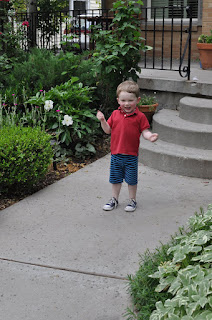 A few weeks ago we made it 33 months into this joint venture of parenthood/childhood. You were sick with some sad little summer cold that made your voice quite hoarse and you ran screaming in the opposite direction if I so much as suggested that you might want to blow your nose. It sort of summed up the month nicely.

Here's what you do these days. You loved the little poppers on the Fourth of July and threw them by the handful. You hated the bigger fireworks and watched them from the dining room window. At the park you climb the ladders and find rocks to roll down the slide. You slide down the slides without a moment's hesitation, which is so different then even six months ago when you would stand at the top dithering and fretting over whether to come down or not. Now you drag trucks and cars to the top of the slides, send them roaring down and follow hot on their heels. You pick up more rocks and toss them at the slide looking at me out of the corner of your eye waiting for me to say no. When there aren't any other kids at the park I let it go. It is very hard for me to let things go and I'm trying. Really trying hard. It's not easy.

You negotiate all the time. I say, "please take your trains downstairs," and you immediately counter with, "How about I leave them upstairs?" You actually use the phrase, "How about." It floors me. 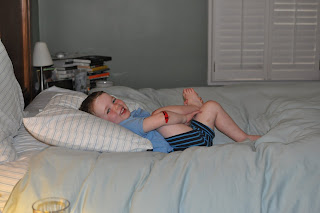 Your musical tastes are slowly evolving into something that I can live with and I had an incredibly proud moment the other day when you asked me for, "The train rolling down the track song. Johnny Cash." We then listened to Folsom Prison Blues on repeat until I had to turn it off for fear you would make me dislike that classic. You danced like a crazy person at the Josh Riter show at Red Butte the other week, which was actually the last time we are ever going to take you to a Red Butte show because it was such a nightmare to keep track of you running through the dark at the outdoor show. It pains me because I loved taking you to shows in the past and some of my sweetest memories are of you and your dad at Red Butte but you make things so difficult that sometimes it is not worth it.

What an awful thing to say.

I don't like to sugar coat things on this blog. I know this little forum has morphed from letters to you to broader reflections on parenthood and sometimes I write things here that I am not sure I want you reading until you are much older and able to understand that while I love you, you also drive me crazy. Really and truly crazy. So I'm just going to come right out and say this because it seems like it is such a terrible thing to say and a lot of parents don't for fear they are going to be branded the worst parents in the world. Parenting is very hard work and you know what, sometimes I'm not all that fond of you. Sometimes I don't like you very much. Sometimes you are like the awful employee at work that burns popcorn in the microwave so that everyone can smell the hideousness for days afterwards. You are willful and you hit things and you talk back to me and you throw yourself to the ground and freak out over the most minor of supposed infractions, like I didn't hold you up the right way so that you can turn on the ceiling fan. Or I offered you milk first thing in the morning instead of turning on the light. Or I didn't pour the exact right amount of juice into your cup. Perhaps these are the beginnings of some serious OCD tendencies or maybe you are just two going on three. Whatever it is, I can see already that the therapy bill is going to go through the roof in this next year. You make me insane and you know you make me insane and you relish that power.

I think the thing that bothers me the most is that so often your mood mars what is supposed to be a fun outing for our family. (see: Red Butte concert mentioned above) I know you are two. I understand that and I guess I am supposed to also understand that you have little to no self control and therefore are a victim of your own two-ness and I am supposed to be okay with that. Only, I'm not. I don't think it would kill you to show a little gratitude. I know, I'm being ridiculous but honestly, you make it so hard sometimes. 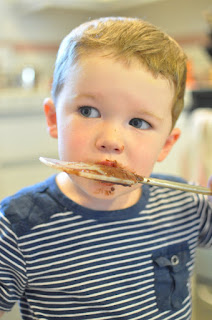 So there, I said it. I said the stuff you aren't supposed to say. I said I don't like you and you'll read this someday and maybe you'll head to your therapist but hopefully by that time you'll have a kid or two of your own and maybe sometimes you won't like them very much. But this doesn't mean I don't love you. I spend a lot of time telling you these days that even though I yell that I still love you no matter what and that I'll always love you even when you have made me angry or frustrated. And you break my heart by prompting me to say, "Sorry I yelled." And I apologize and then sometimes you do too. It's hard. Things are tough for us right now and I don't see that changing anytime soon. It must be difficult to live under such authoritarian rule all the time but sometimes I feel like I am living with a very small dictator of my own.

So, here is something to lighten the mood. Your dad and I nearly fell on the floor laughing. And no, you cannot watch this until much much later because you repeat everything I say these days and I don't want you going to camp and repeating this montage. 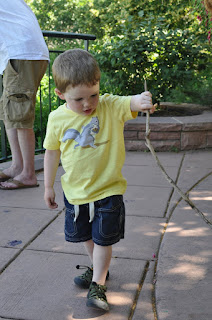 Yesterday we went on a small hike around a lake up in the mountains with some friends. I took you on the same hike exactly a year ago and I couldn't believe how much faster we made it around the lake this year; even with you stopping to throw rocks into mud puddles and to climb with no hesitation on the bigger rocks that lined the trail. You exclaimed over the ducks and I breathed in the warm piney air and marveled for the thousandth time that I live in a place so beautiful. You looked with fascination at the people fishing and declared that you also needed a fishing pole and your dad was quite happy when you told him that later in the day. Then we got back in the car and turned on the Wagon Wheel song, which you call the Train Wheel song even though there is no mention of trains. We rolled down the windows and headed back down through the most gorgeous canyon bordered on either side by towering mountains covered in pine trees and a massive creek running next to the road still flowing like a wild river from the winter snows. I sang softly to myself and you danced in your car seat and then declared that you love the mountains. My throat constricted and I replied simply, "I love you."
Posted by kate reymann at 2:32 PM 7 comments: