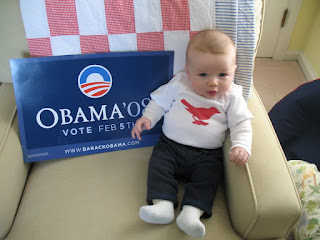 Luke, you turned three months old yesterday. I missed your two month birthday. I am not sure why - maybe it was because it was the middle of the holidays and we getting ready to go to Sacramento or maybe it was because we were both sad after your first round of shots. I've never seen you cry so hard. And so I cried too.
The trip for Christmas was so much fun and you were an absolute champ about traveling. I had been worried about flying with you from nearly the moment I found out I was pregnant. And I know I'll spend your entire life wondering how you will react to certain situations, but in this one, as we took off from Salt Lake, you were completely passed out sucking on your pacifier and were as good as gold - both ways. You were the baby that everyone complimented us on when we got off the plane. It was as if you assessed the situation and decided you would hold off any breakdowns until we were off the plane. We were so proud.
You smile all the time now. When I walk into your room in the morning, you turn your head - the rest of you still swaddled - and break into this huge grin when you see me. It is so unbelievably sweet and gratifying. You like to stand now also all the time. Lying down is so six weeks ago. You stand in our laps and whip your head around on your newly strong little neck looking around all the time. You are just starting to begin to be able to hold things. You tentatively reach for things and just two days ago you started to pull things into your mouth. This isn't surprising because you spend a lot of the day trying to stuff your hands into your mouth. This seems to be a source of happiness and constant frustration to you; I really cannot figure out which. And tonight, as if you knew how happy we all were, you laughed and laughed when I stood you on my lap. It was the most wonderful sound.
So yesterday, January 19th was your three month birthday and today, the 20th is the three year anniversary of your parents' first date. This is pretty important and almost as important, is the fact that today is Inauguration Day. Barack Obama is going to be sworn in as President today and I am sitting here watching the coverage on television. Your Aunt Anne is there and someday she'll be able to tell you what it was like to be there on the Mall today, this most amazing day. But we are watching it on our couch, which seems fitting since we have watched the entire election on this couch - through my entire pregnancy, election night when your father and I cried and held you close marveling that Obama had actually won. And now it looks like millions of people are converging on the Mall and I have cried many times already watching these thousands of people who are so excited and so happy even in the face of this awful economic crisis we are in, this terrible depression that is closing in on so many lives. But in this moment it seems as if these worries are set aside even for a few hours. The pictures are amazing. There are people as far as you can see.  But I am so grateful that you are here with us in this time in history. We have such hope.
Posted by kate reymann at 8:11 AM