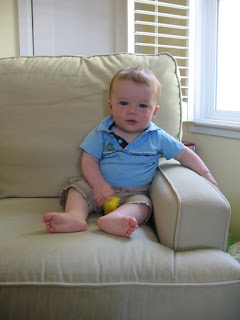 Eight is great. Or so the phrase goes. I'll go ahead and say that month eight was way better than your seventh. I cannot believe how much happened in the span of 30 days.
You grew a new top tooth, or are in the process of doing so. It's about 1/4 of the way out. You can now pick up your cheerios with your thumb and forefinger most of the time. You are eating all sorts of new and wonderful things. And you are crawling. Yes, crawling. It happened last week. I put you down on the floor and suddenly out of the corner of my eye you were a few feet from where you had started. I couldn't believe it so I tried it again and there you were crawling. You don't consistently crawl in the strict sense of the word. Sometimes you hop forward pushing yourself forward with your legs like a little rabbit and you still cruise around on your stomach. You are not very open about crawling with anyone outside of the house. I took you to Little Gym this week ready to show off your new skills and you just sat and watched all the other kids crawling. You'll show them when you are ready.
There is so much more. You are talking. You look at your dad and say "Dada," which is really sweet and awesome. You also say Dada for a lot of other things too. The only time you say Mama is when you are wailing in your crib in the middle of the night. You started making a "b" sound so I think you are working on Buddy's name.
This month we took not one, but two, trips to California. The first was a sweet gift from your dad who was worried about me because I wasn't making any friends and feeling lonely. You are a great companion but pretty limited in conversation skills so Dad sent me off to California to see my sister, your aunt. It was a tough trip for me because I had the worst migraine of my life but you had a great time playing with your cousins. You were especially enamoured of Avery who lavished you with attention much to the great disappointment of Birch who would like nothing better than some attention from his older brother. But somehow you knew I needed to rest and you started taking longer naps, which I was very very grateful for.
Then two weeks later we were back on the plane, this time headed for Sacramento and a night with your grandparents without us. I gave your poor Nan lists of things to do with you, how to feed you and cloth you and put you to bed. I worried that you would cry the entire time we were gone harkening back to when my parents left me years and years ago and I stood at the door and cried all day long. My poor grandmother. You seemed to behave a lot better and were all smiles when we came home the next day from Napa having celebrated our second wedding anniversary a little early at the French Laundry. It's a good thing you have no idea what you missed out on or else you might never forgive us.
You are on the go from the moment you wake up twisting and turning to see Buddy who prances and paces waiting for us to feed him breakfast. You are constantly moving across floors going after all the things you aren't supposed to touch like wires and dirty shoes. You writhe around swiveling your tiny baby hips every time I have to change you. Trying to get you to sit still is an almost impossible task. But today you were not in the mood to take a nap and I went in and got you out of your crib to give you some more of your bottle and when you were finished you were still awake but sleepy and I held you close and you didn't wiggle away and I just sat there rocking and feeling the full weight of your little body in my arms, your breaths moving in and out, your head resting against my shoulder and I smelled your sweet baby hair and felt overwhelming love for you, my darling son.
Posted by kate reymann at 3:24 PM

Hi Kate, I read all of your entries and really enjoyed catching up on Luke's life! You write beautifully and I know you will love looking back on these posts one day. Hope to see you soon!

My favorite, so far.